New paper out in Frontiers in Microbiology

A new paper "Phytopathogenic Rhodococcus Have Diverse Plasmids With Few Conserved Virulence Functions" from the Jeff Chang lab was published this week in Frontiers in Microbiology.

Elizabeth Savory and Alexandra Weisberg (Jeff Chang lab) are co-lead authors on a new paper published in Frontiers in Microbiology.

Plant pathogenic members of the Rhodococcus genus cause an economically important disease that afflicts nurseries, one of the top agricultural commodities in the state of Oregon. These bacteria cause unusual growth deformations, commonly referred to as leafy gall disease, to a wide range of plants. Correlated with the ability to cause disease is the induced production of cytokinins by the bacteria. Plants also produce cytokinins, which are demonstrable growth-promoting plant hormones. Hence, leading models suggest Rhodococcus produces cytokinins to alter the growth of plants and cause disease.

In this study, co-led by Drs. Savory and Weisberg, researchers used genetic and genomic methods to reevaluate genes and plasmids of Rhodococcus implicated in the ability of these bacteria to cause disease to plants. Findings from this study suggested that fewer genes than originally identified are necessary for disease and generated new hypotheses on virulence mechanisms. Secondly, findings suggested that the virulence genes are exchanged and can recombine into diverse plasmids. This has important implications because movement of virulence genes among plasmids has the potential to accelerate the rate in which pathogens diversify.

Dr. Elizabeth Savory is currently the Plant Health Manager at the Oregon Department of Agriculture. All other authors were or are undergraduate researchers in the lab. Danielle Stevens is pursuing a PhD in genetics and genomics at the University of California, Davis. Dr. Allison Creason received her PhD as a student in the lab and is currently a computational biologist at OHSU. Skylar Fuller is pursuing a MD at OHSU. Emma Pearce is currently in the Chang lab.

Rhodococcus is a genus of Gram-positive bacteria with species that can cause growth deformations to a large number of plant species. This ability to cause disease is hypothesized to be dependent on a cluster of three gene loci on an almost 200 kb-sized linear plasmid. To reevaluate the roles of some of the genes in pathogenicity, we constructed and characterized deletion mutants of fasR and four fas genes. Findings confirmed that fasR, which encodes a putative transcriptional regulator, is necessary for pathogenesis. However, three of the fas genes, implicated in the metabolism of plant growth promoting cytokinins, are dispensable for the ability of the pathogen to cause disease. We also used long-read sequencing technology to generate high quality genome sequences for two phytopathogenic strains in which virulence genes are diverged in sequence and/or hypothesized to have recombined into the chromosome. Surprisingly, findings showed that the two strains carry extremely diverse virulence plasmids. Ortholog clustering identified only 12 genes present on all three virulence plasmids. Rhodococcus requires a small number of horizontally acquired traits to be pathogenic and the transmission of the corresponding genes, via recombination and conjugation, has the potential to rapidly diversify plasmids and bacterial populations. 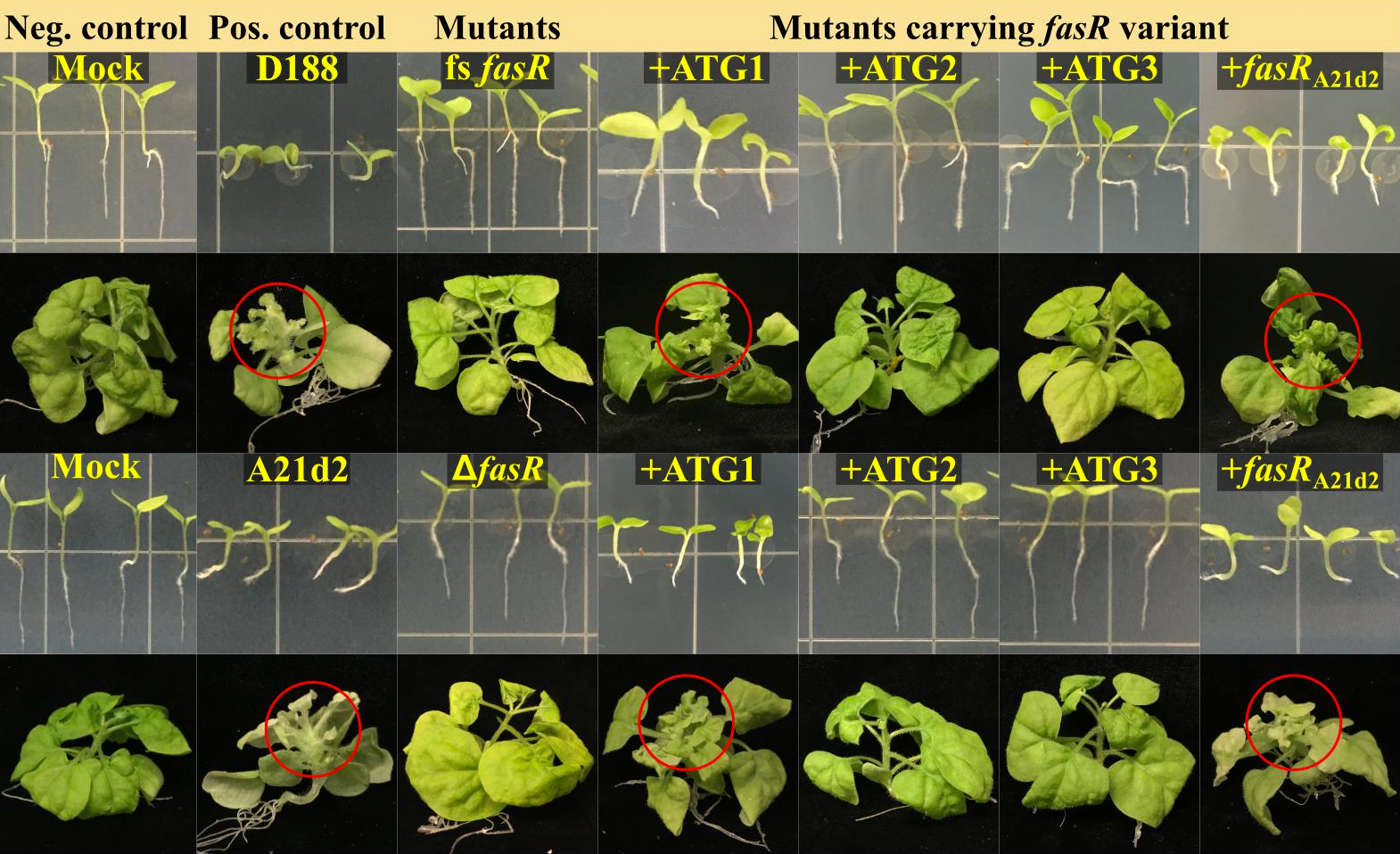