In 1992 Lewis and Lyn Roth gave a 55-acre forest tract located 50 miles northwest of Corvallis, to the Department. This is being used to establish a graduate research assistantship fund. In 1997, under the management plan, enough older timber was harvested from the property to create an endowment. Earnings from the fund are used to support graduate studies in quantitative forest pathology. The first harvest was followed by a day of tree planting by faculty, undergraduate and graduate students.

Initially the fund helped pay the tuition, research support, travel and related expenses for one graduate student. As additional timber is harvested, proceeds from sales will be added to the endowment fund, making it possible to benefit more students. Harvested areas will be replanted. 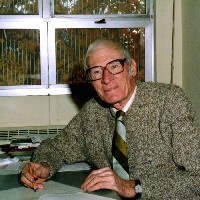 Dr. Lewis Roth earned his bachelor degree in Botany from Miami University of Ohio in 1936, and a doctorate in Plant Pathology from the University of Wisconsin, Madison in 1940. He began his career at Oregon State University in 1940, with five years' time out for service in World War II and a year for post doctoral work at Harvard in 1947. Dr. Roth worked closely with the College of Forestry and forestry agencies throughout his career. After retirement in 1979, he continued for some time to consult and do research on forest diseases.

Evelyn 'Lyn' Roth grew up in Indiana and completed a masters degree in Teacher Training at Purdue University. She took a position at Oregon State University in 1941 to train teachers of the Corvallis School District. After a brief period at the University of Wyoming she returned to Oregon as assistant supervisor in the state's Division of Vocational Education in Salem.

Lyn and Lewis married in 1945. They moved to Wyoming for one year. In 1946 they returned to Corvallis where they raised two daughters. Most summers were spent in the field carrying out research on forest diseases.

Students who have benefited from the endowment