Contents of this survey: 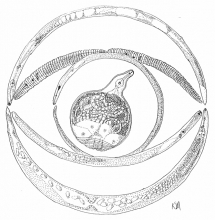 The damage numbers listed below are from replicated studies. Those conducted in pots or microplots are indicated where possible. Study conditions may deviate from local Pacific Northwest conditions in soil type, climate, moisture, and a host of other factors. Nematode numbers vary seasonally (Ingham and Merrifield 1996). In many of these studies, the season at which samples were taken is not indicated, but in some, nematode numbers are designated as initial or as final levels. Therefore, these data are presented only to give suggestions of nematode levels at which damage may occur.

Nematode damage numbers in this document are expressed in this survey as nematodes/100 grams (g) soil or number of nematodes/100 cubic centimeters (cc) soil. Numbers/100 g soil may be multiplied by 20 to give the number of nematodes/2000 g soil (traditionally designated by the OSU Nematode Testing Lab as one "quart"). Nematode numbers from the OSU Nematology Lab are now expressed in terms of 100 g soil corrected for soil moisture. Nematode numbers/100 cc soil can provide a rough estimate of numbers/100 g soil corrected for dry weight but should be divided by the soil bulk density for accuracy. Bulk densities of clay, clay loam, and silt loam surface soils range from about 1.0 to 1.6 g/cc, and those of sands and sandy loams range from about 1.2 to 1.8 g/cc (Buckman and Brady 1969). However, the bulk density of the sample actually processed is dependent upon packing density during measurement. Since bulk densities are not frequently reported in studies in which nematode numbers are expressed on a volume basis, accurate conversion of numbers/100 cc to numbers/100 grams soil is not usually possible. Nevertheless, since the variation associated with bulk density conversions is generally less than the variation associated with field sampling, numbers/100 cc soil provide an acceptable approximation of numbers/100 grams soil for making management decisions.

Pratylenchus penetrans: One pound of oil/acre is lost for each increment of 322 P. penetrans/g root or each 83/100 g soil found in mid-March (Ingham and Merrifield 1996).

Meloidogyne chitwoodi: Scotch spearmint is a is a non-host for Race 2 (alfalfa race) (Mojtahedi et al. 1988).

Pratylenchus neglectus: The most important effect of P. neglectus is that it can significantly increase incidence and severity of potato early dying (Verticillium wilt). Plants infected with Pratylenchus neglectus are more susceptible to invasion by the early dying disease pathogens, including the Verticillium wilt fungus and the soft rot bacteria Erwinia carotovora ssp. carotovora (Pscheidt 1997). Initial populations of 19 to 188/100 g soil on Russet Burbank suppressed marketable and total numbers and weight of tubers by 19 to 25%. 12/100 g suppressed total number and weight (Olthof 1990). 150/100 cc soil significantly reduced root but not shoot or tuber weight at 15 C but not at 20 or 25 (Umesh and Ferris 1994).

Pratylenchus penetrans: Threshold may be lower than for P. penetrans than for P. neglectus (Brodie et al. 1993). 400/100 cc soil may reduce Russet Burbank yields, but their most important effect is that they can significantly increase incidence and severity of potato early dying (Verticillium wilt). Plants infected with Pratylenchus penetrans are more susceptible to invasion by the early dying disease pathogens, including the Verticillium wilt fungus and the soft rot bacteria Erwinia carotovora ssp. carotovora (Pscheidt 1997). Losses in marketable yields ranged from 35% at 67/100 g soil to 43% at 1800/100 g soil (Olthof and Potter 1973). In field plots, initial populations over 10/100 g soil and harvest populations over 72/100 g soil significantly reduced total yield during over two years and marketable yield in one of two years (Olthoff 1987) 1000 to 2000/100 g soil measurably reduce yields (Potter and Olthof 1993). In microplots, initial populations of 38 to 211/100 cc soil significantly reduced tuber yields of Kennebec and Superior but not Russet Burbank; Katahdin was insignificantly reduced (Bernard and Laughlin 1976). 100, or 200 to 600,/100 g soil (different experiments) (Barker and Olthof 1976). In microplots, 185/100 g soil significantly reduced marketable Russet Burbank tubers by 15.7%. Kennebec, Monona, Norchip, superior, and Yukon Gold did not differ significantly from control (Olthof 1983).

Xiphinema americanum: Associated with unthrifty growth and poor yield of pome fruit in the eastern USA; reduced growth of apple seedlings was accompanied by roots with brown lesions, swollen tips, necrosis, and sloughing off of the cortex (Nyczepir and Halbrendt 1993).

Criconemella xenoplax: Associated with apple in South Africa but does not appear to be a major problem in the United States (Nyczepir and Halbrendt 1993).

Meloidogyne chitwoodi and M. hapla: Not known to be a problem on apple in the United States (Nyczepir and Halbrendt 1993).

Pratylenchus penetrans: 20 to 50/100 g soil (Barker and Olthof 1976). Initial population of 15/100 g soil necessary for growth reduction. 25 to 150/100 cc soil are considered damaging but can vary depending on soil texture, climate, and additional pathogens (Nyczepir and Halbrendt 1993).

Pratylenchus spp.: Pratylenchus is the only nematode genus considered important to pear production in North America. 25 to 150/100 cc soil are considered damaging but can vary depending on soil texture, climate, and additional pathogens (Nyczepir and Halbrendt 1993).

Meloidogyne chitwoodi and M. hapla: Not known to be a problem on pear in the United States (Nyczepir and Halbrendt 1993).

Xiphinema americanum: Dagger nematodes by themselves are not a problem on pear, and its host status has not been evaluated (Nyczepir and Halbrendt 1993). Xiphinema is a problem on pear if it vectors Tomato Ringspot Virus, which causes Black Line Disease (R. Ingham, pers comm.)

Meloidogyne hapla: No data for susceptibility on Prunus avium and P. mahaleb; P. cerasus is susceptible to M. hapla damage (Nyczepir and Halbrendt 1993).

Criconemella xenoplax: Tree death in North Carolina was likely at 38-83/100 cc soil (no time of year given); the specific role of this nematode in the Peach Tree Short Life (PTSL) disease complex is not completely understood. Yield in a PTSL test orchard was increased by 11,288 kg/ha when preplant soil fumigation with methyl bromide was used (Nyczepir and Halbrendt 1993). In pots, 9, 90, and 180 C. xenoplax/100 cc soil decreased top height of Nemaguard seedlings by 19, 12, and 55%, respectively, after 7 months, but root weight and top weight did not differ significantly. In pots, 9, 90, and 180 C. xenoplax/100 cc soil decreased root weight of Nemaguard seedlings by 7 and 24%, respectively, but top weight and top height did not differ significantly (Barker and Clayton 1973). In pots, 175 C. xenoplax/100 cc soil reduced Nemaguard and Lovell fresh tree weight by 44 and 70% alone and 57 and 70% with Pseudomonas syringae. Fay Elberta peach trees grown on either Lovell or Nemaguard rootstocks were highly susceptible to bacterial canker if inoculated with C. xenoplax, and serious canker did not develop without the nematode (Lownsbery et al. 1977). In pots, tree survival was 100% at 0.46/100 cc but less at all higher initial population levels. All seedlings exposed to 119, 478, and 956/100 cc soil were dead by 270 days. After 270 days, height increase was 43, 82, and 82% less, and dry root weight was 39, 62, 35% less at initial population levels of 0.46, 1,9, and 7.5/100 cc soil, respectively (Nyczepir et al. 1987).

Meloidogyne hapla: Nemaguard, Lovell, and Okinawa rootstocks are susceptible; no data on Nemared. Results from tank test indicated that young Okinawa and Nemaguard were infected, but no field reports of damage. (Nyczepir and Halbrendt 1993).

Pratylenchus spp.: All commercial peach rootstocks are susceptible to root-lesion nematodes, but some evidence for resistance has been shown in Rubira, Pisa, Rutgers Red Leaf, Tzim Pee Tao, and in some hybrids of Rugers Red Leaf X Txim Pee Tao (Nyczepir and Halbrendt 1993).

Meloidogyne spp.: Species have been associated with plum decline (Nyczepir and Halbrendt 1993).

Meloidogyne hapla: In pots, root and shoot weight of Vitis vinifera vines inoculated with 1000 eggs/100 cc was significantly lower than that of uninoculated vines. Vitis vinifera cv. Columbard is susceptible (Reprod ratio = .05), but V. champinii cv. Ramsey is not susceptible to M. hapla, although both grape cultivars are susceptible to M. javanica and M. incognita. (Walker 1997). Yield loss has been associated with population densities greater than 120/100 g soil in eastern Washington (Pscheidt 1997).

Xiphinema americanum: Has been found in western Oregon; may vector Tobacco and Tomato Ringspot Viruses, which have been reported occasionally on grape in the Pacific Northwest. As a virus vector, it can be damaging at very low population levels. Populations may be very low in late summer when other nematodes are abundant (Pscheidt 1997).

Xiphinema pachtiacum: Yield loss in eastern Washington has been associated with population densities greater than 10/100 g soil. If Tobacco and Tomato Ringspot Viruses, which have been reported occasionally on grape, are not present, the nematode by itself may not be a problem,. However, as a virus vector, it can be damaging at very low population levels. Populations may be very low in late summer when other nematodes are abundant (Pscheidt 1997).

DiSanzo, C. P. 1982. Effect of foliar applications of carbofuran and a related compound on plant-parasitic nematodes under microplot and field conditions. Journal of Nematology 14:208-212.

Griffin, G. D. 1989. Comparison of fumigant and non-fumigant nematicides for control of Meloidogyne chitwoodi on potato. Supplement to Journal of Nematology 21, No. 4S, 640-644.

Mojtahedi, H, and Lownsbery, B. F. 1975. Pathogenicity of Criconemoides xenoplax to prune and plum rootstocks. Journal of Nematology 7:114-119.

O'Bannon, and Santo, G. S., J. H. 1984. Effect of soil temperature on the reproduction of Meloidogyne chitwoodi and M. hapla alone and in combination on potato and M. chitwoodi on rotation plants. Journal of Nematology 16:309-312.

Olthof, Th. H. A. 1987. Effects of fumigants and systemic pesticides on Pratylenchus penetrans and potato yield. Journal of Nematology 19:424-430.

Olthof, Th. H. A., and Potter, J. W. 1971. The relation between preplant populations of Meloidogyne hapla and crop losses in field-grown vegetables in Ontario. Journal of Nematology 3:322 (abstr.)

Olthof, Th. H. A., and Potter, J. W. 1973. The relationship between population densities of Pratylenchus penetrans and crop losses in summer-maturing vegetables in Ontario. Phytopathology 63:577-583.

Umesh, K. C., and Ferris, H. 1994. Influence of temperature and host plant on the interaction between Pratylenchus neglectus and Meloidogyne chitwoodi. Journal of Nematology 26:65-71.