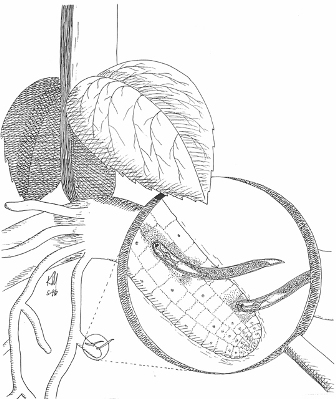 The name "nematode" comes from the Greek words: nema , which means "thread", and toid , which means "form". Nematodes are usually vermiform, long and slender, but some species are swollen. Most people know them as roundworms because their cross-section is round. They range in size from .08mm to 7m. Nematodes are a tube within a tube. The outside tube is the body wall which consisits of muscle layers that are used as a protective covering. The inside tube is the digestive system. The esophagus is the front of the digestive tube.

Where do nematodes live, and what do they eat?

Nematodes exist almost everywhere, including soil, plant and animal surfaces and interiors, decomposing life forms, and fresh and salt water and their subtending sediments. Nematodes can be grouped according to what they eat. The different groups are fungal feeders, bacterial feeders, predators, animal parasites, algal feeders,omnivores, and plant parasites.

How do plant-parasitic nematodes harm plants?

Plant-parasitic nematodes pierce plant cell walls with their stylet, which is formed by some of the mouth and esophagus parts. Then they pump up the plant cell just into their digestive system. These nematodes only feed on a certain part of the plant. Most feed on the roots. Some of kinds of nematodes feed only on the outer tissue of the root, others penetrate more deeply, and some completely enter the host. There are different ways they harm the plants. Some induce their hosts to produce nutrients which the nematode can survive on, or enlarged structures in which the nematodes live, or both. Some produce metabolites which kill host tissue. These activities all result in energy being removed from plants to support nematodes. Some plant-parasitic nematodes can cause severe damage that can result in unmarketablity, yield decrease, or even total crop failure.

What are some plant-parasitic nematodes particularly harmful to Oregon agriculture?

Root-lesion nematodes (Pratylenchus) rip a hole in the sides of root cells and crawl inside. They move through the root, piercing, sucking, and leaving behind a trail of both cell-killing metabolites and eggs. Cell death results in brown lesions on the roots. Lesions begin on one side, but may encircle a root and thereby girdle it. The overall effect is a weak, shallow root system with a lot of dead areas.

Root-knot nematodes (Meloidogyne) enter roots as juveniles, select a feeding site of three to eight cells, and swell up in their chosen spot as they progress towards adulthood. They introduce hormone-like substances into the plant cells, causing the plant to swell in the area producing galls, or root knots. Males regain their slender profiles and leave the root at adulthood, but the fattened adult females remain inside. They exude eggs into the soil, and after the juveniles hatch, the cycle begins again. Roots infested with root-knot nematodes usually have visible galls and may exhibit excessive branching. Parasitized plants may be weak and stunted. Root systems may be deformed, and underground organs such as potato tubers and carrot taproots may be damaged and unmarketable.

Pin nematodes (Paratylenchus) pierce root cells from the soil outside of the plant. Low numbers may appear inconsequential, but in high enough numbers, pin nematodes can damage crops.

Stubby-root nematodes (Trichodorus and Paratrichodorus) are also external soil-dwelling parasites. Besides piercing root cells and sucking out the contents, they can vector viruses such as the Tobacco Rattle Virus, which causes corky ringspot disease in potato tubers. Other virus-vectoring plant-parasitic nematodes are Xiphinema , daggar nematode, which can vector Tomato Ringspot Virus, a disease of many fruit crops, and Longidorus ("mint nematode").