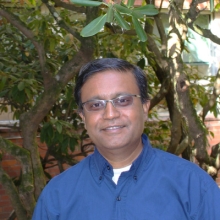 My primary research focus is on studying the processes of flowering time and seed development in plants. These two developmental features of a plant determine how a plant reproduces on time and generate fruit/seeds thus contributing to our nutritional needs by way of quality and global food security by way of yield. We are interested in studying these two developmental features and their response to abiotic stresses like salt, drought and photoperiod.

The project includes genome-wide mapping of genomic/genetic loci (genes) in rice that regulate gene expression and gene to gene interactions influencing changes in the flowering time and seed development. We use molecular and genetic applications such as the genetic diversity, mutant phenotypes, genome sequences, gene expression and bioinformatics approaches, to provide mechanistic insights into the plant development and its adaptation to the global climate change (abiotic stress).

The lab encourages young scientists and students to use cutting edge technologies on genome sequencing, gene expression, plant development, and bioinformatics. The lab has an interdisciplinary program on training in computational biology /bioinformatics and plant biology. We collaborate extensively with computational biology scientists at the OSU, Plant and Gene Ontology projects, Gramene database and iPlantCollaborative (iPlant) lead by the University of Arizona and Cold Spring Harbor Laboratory.

The lab works on number of genomics aspects including the Comparative Plant Genomics, Functional Genomics, Systems Biology, Genome Annotation, Biochemical and Regulatory Pathways, Genome Databases and Ontology Development. Besides large scale genomics projects, we also have a wetlab work bench laboratory to work on biology of plants with respect to flowering time pathway, seed development and organelle (chloroplast and mitochondrial) function. Therefore we think its a great place to work with facilities available for a wet-lab work bench that uses molecular Biology and Biochemistry and seamlessly integrates the dry-lab components involving Computational Biology and Bioinformatics approaches to study the fundamental processes of plant gene function(s).

We routinely collaborate on performing functional annotation of plant genomes such as those of following species. These annotations include, phylogenetic analysis of gene orthologs and paralogs, Gene Ontology based functional assignments to genes and developing metabolic and regulatory networks of genes.