The lichen team at OSU, in collaboration with colleagues at Duke University and the University of Liège, recently described a new genus of lichens known only from western Oregon, near Corvallis.

While most new genera these days result from splits of existing genera based on new molecular evidence, this new genus has a completely different form than its closest relatives and the species was completely unknown. The new genus has a minutely shrubby growth form only 1 mm tall, while its closest relatives, the large foliose lichens in Peltigera, can sprawl over a meter in diameter.

Sifting through unidentified and partly identified specimens in the Oregon State University Herbarium has been part of our lichen herbarium improvement project, which has been graciously sponsored by a private donor, Shirley Tucker. Doing this we found a minutely fruticose cyanobacterial lichen on soil that we had not seen before. Under the microscope it revealed a unique cellular structure, with cortical cells shaped like jigsaw puzzle pieces (see illustration).

William C. Denison, a long-time mycologist at Oregon State University, now deceased, had collected the specimen in 1969 up the Luckiamute River from Hoskins. Because the area is so heavily impacted by logging, road building, and road dust, we had only slight hope for actually finding fresh material to sequence. We needed to get molecular clues to its closest relatives since the form of the lichen was like no other. Our fieldwork paid off – on our first trip we found a new site for the species, the only other site that we have been able to find so far. Sequencing several loci demonstrated that the species should be placed in its own genus and species, which we named Sinuicella denisonii, in honor of Bill Denison, the original collector and a devoted mentor to many students. 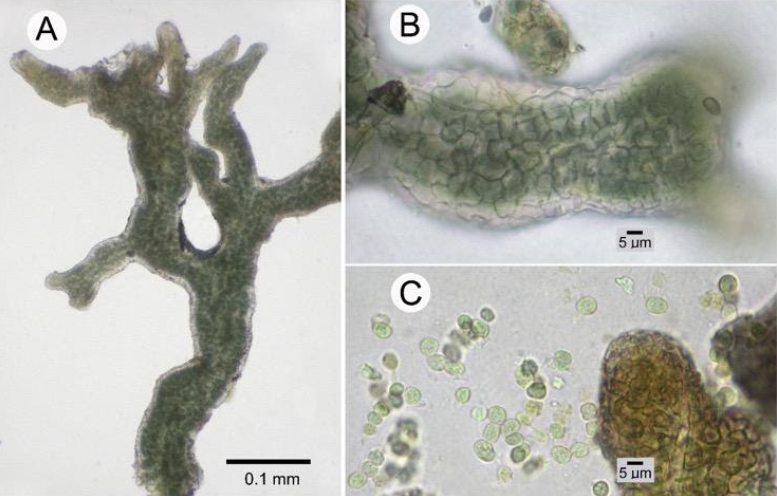