The annual proceeds of the endowment will be used to support travel of graduate students within in the area of Botany and Plant Pathology.  It is the wish of the donors that these funds be used by graduate students for attendance at professional meetings where the recipient has a specific responsibility such as presenting a poster or paper, or participating in a discussion as an invited participant. 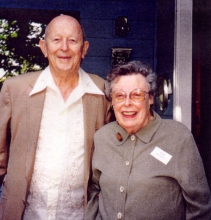 Established in December, 2002, this fund is made possible by generous contributions from Anita S. Summers and John S. Niederhauser, friends and supporters of our department and who together wished to enhance the educational experience of our graduate students.

Anita and Herb Summers were generous supporters of a number of programs at Oregon State University, including Presidential Scholarships, the Agricultural Honors Scholarship, establishment of the Wheat Research Endowed Chair, and an Educational Endowment, whose annual income has benefited the Department of Botany and Plant Pathology.

Anita, who passed away on July 22, 2008, was a Eugene native and graduated from the University of Oregon as Phi Beta Kappa in Economics. Herb, who preceded Anita in death, was an Oregon State University graduate. They retired to Corvallis after many years in Sacramento. In 1996 Anita was inducted into the College of Agricultural Sciences Hall of Fame to honor the Summers' generosity.

John Niederhauser passed away on August 12, 2005. He was a graduate of Cornell University, and was awarded an Honorary Doctorate of Oregon State University in June 2002.  John spent much of his professional life as a plant pathologist helping to feed the developing world while preserving the environment.  In 1990 he was awarded the World Food Prize in recognition of his work with national programs that have dramatically increased potato production in developing countries.

John was an Adjunct Professor at the University of Arizona. In the last few years he was a frequent visitor to Oregon State University.