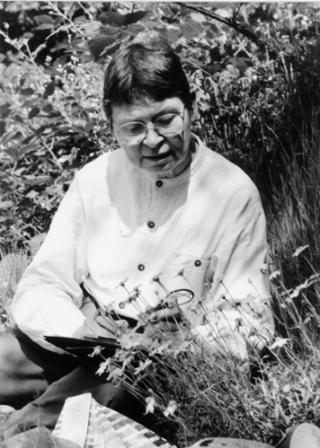 The Bonnie Hall Student Activity Endowment Fund is named in 2004 in honor and memory of Bonnie Hall's contributions to the department. This fund was originally established in 1993 after the sale of Bonnie's artwork to benefit student group trips.

The endowment will be used to support group activities for undergraduate and graduate students.

Bonnie Hall's artwork has been a mainstay of our department since the early 1990's when she undertook her first prints of the native flowers of Witham Hill.  Along the way, she designed the department logo that adorns  our website, appears on the green and white ceramic cup sold by the undergraduates, and appeared on a T-shirt sold by the graduate students.

The graduate students also used several of her floral prints for T-shirt designs.  Many of the floral prints have appeared in "Posies and Pathogens".

Over the years, Bonnie contributed many boxes of notecards  and matted prints to be sold by the department as a fundraiser for our group travel fund.  As a result, we have an endowment fund that grew primarily from the sale of her artwork and which supports group activities for undergraduate and graduate students.  Past expenditures have included the fall graduate student trip to the coast (to welcome new graduate students), undergraduate field trips, pizza parties that brought the graduates and undergraduates together to talk about graduate school, and similar activities.